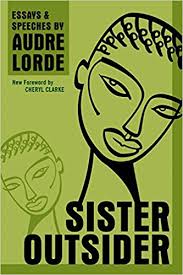 At last, the 2018 TCG National Conference in St. Louis was over. The conference team had retreated to the hotel bar with a small number of beloved attendees. We were processing an emotionally overwhelming few days. At that time, I was out as a trans woman to only two people at the Conference. It was about to become three.

Sitting across from me at a table for two was my former TCG colleague and dear friend Dafina McMillan. I knew this might be my only chance to tell her in person, so I took it. She responded with her usual love and understanding. Then, she surprised me:

“Well, this also means as a White woman you have a whole bunch of work to do.”

In some ways, this was the deepest affirmation she offered. The truth of my identity was both a liberation and a newfound responsibility. I had an accountability to the long and painful history of White Feminism and the damage it has inflicted on Black women and all women of color. But my accountability is personal, as well.

Because in many ways, Black Feminism has saved my life. At the end of 2017, I read and reread Sister Outsider: Essays and Speeches by Audre Lorde. For years, I’d been citing individual essays of Lorde’s, but never read her work deeply or in full. I scribbled in the margins and wrote long journal entries trying to process the revelations of her work.

In particular, a single page in The Transformation of Silence into Action shook my core:

“What I most regretted were my silences. Of what had I ever been afraid? To question or to speak as I believed could have meant pain, or death. But we all hurt in so many different ways, all the time, and pain will either change or end. Death, on the other hand, is the final silence. And that might be coming quickly, now, without regard for whether I had ever spoken what needed to be said, or had only betrayed myself into small silences, while I planned someday to speak, or waited for someone else’s words.”

And this above all:

“What are the tyrannies you swallow day by day and attempt to make your own, until you will sicken and die of them, still in silence?”

Those words lodged like a splinter in my heart until, in early January of 2018, I finally wrote down in my journal:

“I am a transgender woman.”

The euphoria and relief I felt in that moment, and I am reliving now as I write this, owes no small debt to the writing of Audre Lorde, and to the traditions of Black Feminist thought.

My debt does not end there. In my activism, no writer’s work has been more illuminating than that of Kimberlé Crenshaw. Just as with Lorde’s work, I’d been citing intersectionality without having read any of Crenshaw’s foundational research. Reading it was a series of lightning strikes, illuminating problems I’d been struggling with for years. Places where I’d felt utterly lost in the work—where I’d been re-inscribing the very oppression I’d been working against–suddenly offered new ways forward. If Lorde helped liberate my body, Crenshaw clarified my mind.

Yet while Lorde occasionally wrote directly (and critically) toward White women, the heart of her work is about and for Black women, and queer Black women especially. Similarly, Crenshaw’s intersectionality emerged from her efforts to understand how social justice efforts for women and people of color failed Black women.

They weren’t writing for me. Yet their writing was essential to my liberation.

It is the glory of their work that the tools with which I can pay back that debt are the ones I’ve learned from them. It is the irony of oppression that in seeking to use those tools for good, I have great potential to do harm. To continue White Feminism’s long history of appropriation, exploitation, and exclusion. I navigate this tension as I struggle with my own contested status as a trans woman.

The first step is to name the debt, and it extends to Black women with whom I have collaborated directly. Sometimes it’s easier to praise those who have touched our lives at a distance rather than in the complexity of intimacy. But I owe so much to Dafina, whose leadership at TCG I think about and miss every day. Carmen Morgan, founder of TCG’s EDI Institute and now of artEquity, had such an impact on my analysis that I’m still learning from the time we had together. Jacqueline E. Lawton helped me understand the beauty of what truly intersectional community-building can feel like. I draw strength from Sarah Bellamy’s eloquence of thought and generosity of spirit. She’s the kind of leader that calls out our best and deepest selves. I am in loving awe of Claudia Alick’s collective actions and their performances of justice. With Flux Theatre Ensemble, my creative home, my long collaboration with Lori Elizabeth Parquet has transformed my work as a playwright.

I name these women not to signal my wokeness. I name them because if you value my work as an activist and artist then you should know the context and communities from which it emerges. And my work and life have been transformed by Black Feminism and Black women. I am accountable to them in ways that I’ll be working through all my life.

That work is a gift, but there is pain attached to it. Because I have let Black women down. I have cast Black women in tokenizing roles. I have written those roles. I have been silent when I should’ve spoken up. I’ve taken credit for things that weren’t my own. The pain I feel is useful and clarifying. It reminds me that I can choose something else.

I choose something else. I choose to be precise AF with my anti-racism. I choose to understand the different ways oppression manifests for Black, Indigenous, Asian-Pacific Islander, Latinx, and MENA women and nonbinary peoples. I choose to deepen my understanding of how racism intersects with transphobia, ableism, classism, xenophobia, and sexism. And when I say that I am an intersectional feminist, I will not erase intersectionality’s roots in Black Feminism.

It is the work of a lifetime. But at least now, it’s a life that’s wholly mine. And my heart is light, for I have a whole bunch of work to do.

Error: Twitter did not respond. Please wait a few minutes and refresh this page.