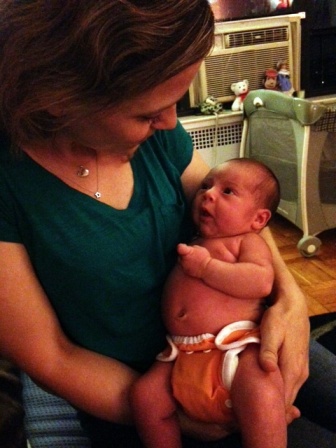 Last night was already special for how well our criatura slept through the night: for two 2 and a 1/2-hour stretches, and then a big 3-hour power sleep. That alone would be call for rejoicing, especially as she barely fussed during any of her nocturnal changing or feeding times (or so it was reported by the Night’s Watch Heather).

But what made it extra special was how she went to sleep: after our usual singing and walking routine, I saw her gradually fall asleep in my arms, making this the first time I’d ever sung her to sleep.

That may not sound like a big deal, but until now, she’d only ever fallen asleep after a meltdown followed by the old football hold and shhh maneuver, or through the food-coma of a big feed. But not only was this a far more enjoyable way to transition her into Dreamville, it also mean that she went from a drowsy state into deep sleep in the bassinet all on her own.

And that, dear reader, is a big step towards living the dream(s).

She may have received an assist from visitor Alisha “Poop Whisperer” Spielmann, who conjured a big poop from Mercena each time she held her. She was far more active and awake for Alisha than she’s been for most other visitors, and this morning, she was up for a couple of hours without too much fussing; all big steps forward.

Part of this success is due to the efforts of the diaper SWAT team minimizing her truly Inscrutable Wails by keeping her from the Altar of Sacrifice. And, part of it is probably just the passage of time, and her growing into her new circadian rhythms and longer alert periods.

I’m also up to page 30 on KD and The Band, thanks to a baby-break split between a nap and Heather’s visit to La Leche League; and moved some things forward for both Flux and NET. The next big step will be to clear some time to dip my toes back into TCG, but we have a double visit day today, so we’ll see what’s actually possible…