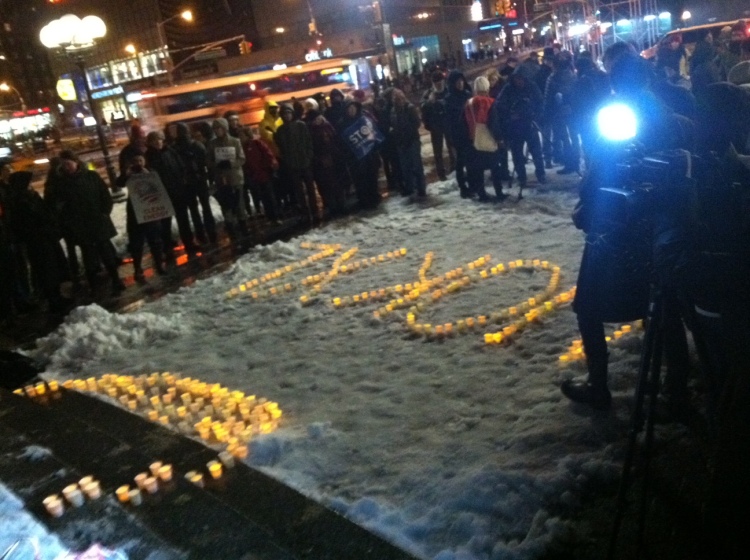 This day is so named for two events: a 350.org rally against the Keystone pipeline in Union Square, and The Fire This Time Festival at the Kraine theatre.  The outdoor protest was a cold one, and the plays inside were bringing the best kind of heat.

First, a little about the rally (pictured above). What felt like 60-80 people gathered in Union Square with signs, candles and songs as part of a country-wide protest that involved 200+ other events. After speeches, songs and protest chants led by various folks from 350 and other support organizations, featured speaker Clayton Thomas-Muller took our frigid stage. The co-director of the Indigenous Tar Sands (ITS) Campaign of the Polaris Institute and a member of the Mathias Colomb Cree Nation, Thomas-Muller electrified the crowd with a speech linking environmental justice to indigenous and civil rights, sharing remarks from the Dakota people resisting the pipeline and ending with a traditional Cree song.

Listening to the song and drum take hold of Union Square, I thought about the knowledge of resistance embedded in the culture of oppressed peoples, from the blues and hip hop to el teatro de los campesinos to voguing, there’s a reason these songs, stories and dances carry such powers of attraction. They are primers for survival, redemption songs, and we need their strength desperately.

Learn more about the Keystone campaign, the divest from fossil fuels movement, and the Idle No More campaign.

I then walked to The Fire This Time Festival, an evening of short plays by early-career playwrights of African and African American descent. Four Fluxers showed up to support the amazing Lori Parquet’s journey as a playwright, and I was also excited to see how the Festival had grown since the last time I attended.

Short play festivals can be a mixed bag at best, but all of these plays had something to recommend them, and several were particularly powerful. Lori’s nuanced and compassionate take on a relationship at the crossroads was a great opener, with strong performances and direction, and a an exciting power shift in the final moments. I also especially connected to the physically poetic fearlessness of Josh Wilder’s Gravity, the dazzling language and moving vulnerability of Angelica Cheri’s Slow Gin Fits, the haunted dreamscape of Jonathan Payne’s The Weatherin’ (featuring the playwright deftly stepping into the lead role last minute) and Dream Awake, which featured powerful performances and a jagged theatricality in its exploration of the legacies of fear and faith.  Bravo and thanks to everyone who made this a great night at the theatre!