So after the meltdown-strewn Sunday, we had a much better Monday, though she didn’t quite take the holiday off from Inscrutable Wails. Still, after a rocky morning, she was calm and slept well for most of the day, including a beatific performance for our evening guests, Sol and Mike.

And this was a very good thing: We mostly recovered from the stresses of the weekend, and were ready for when she resumed her Meltdown Performance Art in the evening (nothing that my new best friend, the football hold, couldn’t eventually cure).

One new thing is that Mercena now treats her changing table as if it was a sacrificial altar, and we’re the malevolent high priests set on terrible deeds. Her heroic wails to stop the evil sacrifice make the changing table our current greatest foe to a meltdown-free world, along with our longtime nemesis, the hiccups. 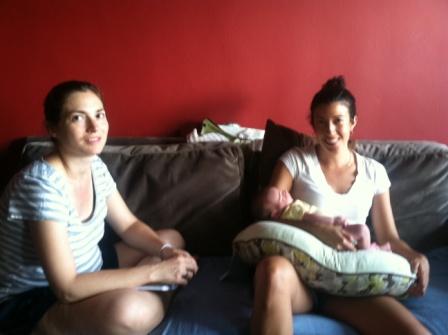 But, as you will note, the name of this day is not Mercena-based (though there certainly are many viable options). It was just about a year ago today that Adam and I embarked on the Play of the Month Club, a foolish but sincere dare to inspire each other to write, well, a full-length play every month.

It seemed for a moment that I might actually pull it off, until a hat trick of life events–the production of Jane the Plain, the TCG Conference and the birth of Mercena–totally knocked me off my momentum.

Here’s what I ended up with:

So, nearly completing six plays is not bad, but it’s a long way from 12 completed full-length plays. That said, my commitment to the club did lead me to work with greater discipline then I otherwise would have done; without the Club, I probably would have would up with 2-3 rather than 5-6. Also positive: several of these drafts are in a very strong place, and one was fully produced.  The original idea was to have twelve rough drafts, so while I shot low in quantity, I did make up for it somewhat in quantity.

I’m recommitting to this again this year, with the understanding that reaching 5-6 will be a major accomplishment in the first year of Mercena’s life. I’m optimistic, because midway through the year I discovered the power of writing on the subway, and it was transformative for me. I’m also adding in the caveat that I will count a chapter of the book I’m working on as a new play.